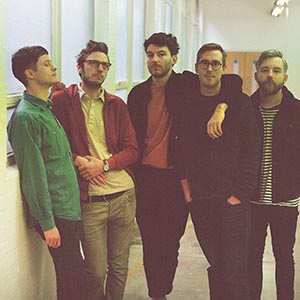 Morningside, Swimming Tapes anticipated debut album, was recorded at their favourite London studio: a tiny space tucked behind an old pub in Haggerston, East London, where the indie five-piece now reside. The studio is a regular haunt of the band’s long-time collaborator Paddy Baird, who produced and engineered this album, and is packed full of vintage equipment including a 1970’s SLS desk which gives Morningside its sepia tones.
In-keeping with their vintage approach, a good chunk of this album (drums, bass and rhythm guitar) was recorded live in the round with the band layering vocals and additional guitar flourishes over the top. The record was then mixed at Wilco’s Chicago studio The Loft by legendary producer Tom Schick, known for his work with the likes of Real Estate and Iron & Wine. It’s a sound that’s simple to replicate on stage and lends natural authenticity to a brilliant live show they recently took across the UK and Ireland, as well as outings at Live At Leeds and Hit The North (more live dates are to be announced soon).
Current single “Keep Her Closer” follows recent singles “Passing Ships” and “Pyrenees”, both of which picked-up plaudits from the likes of The Line Of Best Fit, The 405, DIY and BBC Radio 6 Music.
“Beautiful stuff… love the guitars on that…” Huw Stephens, BBC 6 Music
“Respite from the doom and gloom” The Line Of Best Fit

Watch the official music video for ‘Easy Strand’ below: 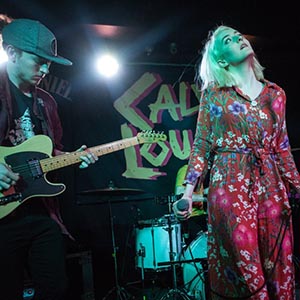 Indie-pop quartet The Sunset Beach Hut have been rapidly gaining attention on the Birmingham gigging circuit. Taking influence from the likes of Two Door Cinema Club, The Japanese House, Bombay Bicycle Club and Fickle Friends, they have combined their efforts into creating something new. With funky bass lines and prominent guitar hooks, and pop inspired vocals, The Sunset Beach Hut are starting to win the hearts of the Midlander’s and look forward to taking their music elsewhere.
Debut single ‘Comfort’ and ‘Upside-Down’ both were awarded BBC Introducing Shropshire’s Track of the Week and their most recent single ‘Bury’ has captured over 20,000 streams on Spotify and they look to follow this success with future releases.
They filled 2018 with some incredible gigs selling out The Sunflower Lounge and supporting some of the UK’s best upcoming bands including SPINN, Stereo Honey, Peaness and The Cheap Thrills and taking their first trip down to London supporting Shields. 2019 has only given them reason to look up, kicking off the new year with a packed headline show at O2 Academy 3, supporting Calva Louise at The Sunflower Lounge as part of their ‘Rhinoceros’ tour and securing their place at international music festival FOCUS Wales 2019.